How to Treat Bleeding Gums at Home

It pretty much goes without saying that bleeding gums can be unsightly and a source of embarrassment. More than that, though, they can be painful and a sign of a serious underlying problem. If you’re lucky, you may be able to treat bleeding gums at home. But if you think your bleeding gums could be a sign of a disease requiring attention from a professional, you should see your dentist or a periodontist and also possibly, depending on your overall health, your doctor.

There are many causes for bleeding gums. These include gum disease, gum infection, dental abscess, medication side effects, malnutrition including Vitamin C and Vitamin K deficiencies, ulcers, poor eating habits, tobacco use, and hormonal changes as a result of adolescence or pregnancy, or oral cancer.

The most obvious symptom of bleeding gums is of course the bleeding. But other symptoms include sore inflamed gums, swelling, pus formation, bad breath, and loose teeth.

If they go untreated, bleeding gums (and the underlying disease, if present) can lead to tooth loss. In fact, 80% of all tooth loss is linked to gum disease. The infection in a sufferer’s gums can spread to the bone, producing a condition called periodontitis that results in bone loss in the bone that holds teeth securely in place.

The way to avoid developing bleeding gums and the oral problems that produce them is to stick to an effective oral hygiene routine. Brush and floss well twice a day to control bacteria and remove plaque. Brushing is especially important after you eat sugary and processed food to prevent decay.

Rinsing with an antiseptic mouthwash twice a day will also help fend off gum disease, as will eating healthy foods like garlic, yogurt, and green tea.

Additionally, visit your dentist’s office twice a year or more often if recommended for your cleanings and checkups. The cleanings will remove plaque and tartar that can cause gum disease, and the checkups will catch any problems early, before they can develop into truly serious conditions.

You should also see your dentist if you notice your gums have inexplicably started bleeding or a changeoccurs in their appearance.

You may have an underlying problem that will require the help of a professional to resolve. Still, there are some things you can try at home to obtain relief: 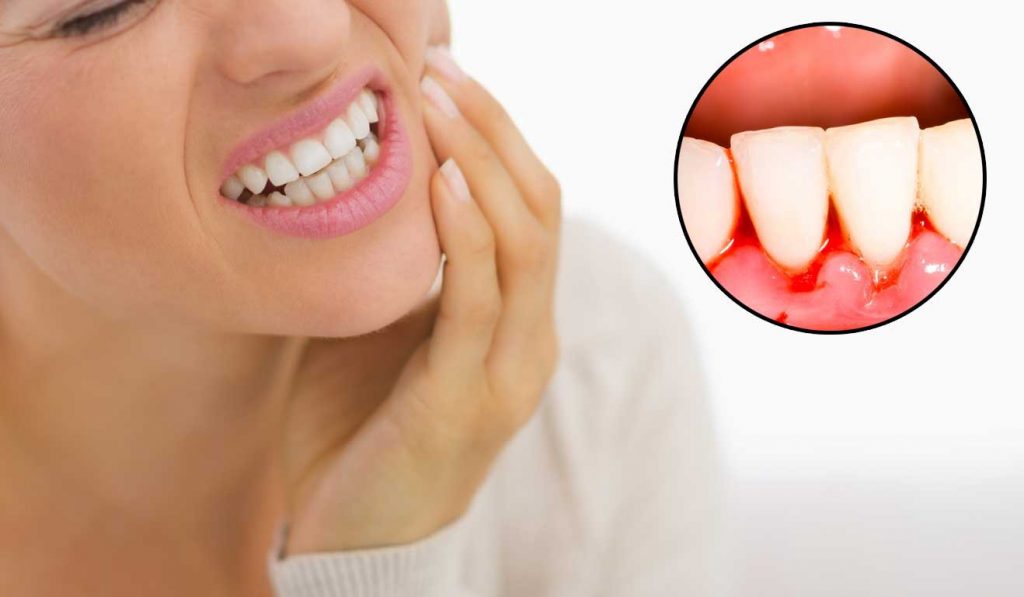 Brush with a soft toothbrush at a 45 free angle into the gum line and massage the inflamed gums with a clean finger.Initially they will bleed more, but after a few days the bleeding should be greatly minimized or gone. If bleeding continues after this, see your dentist or periodontist.

Rinse with warm salt wateror an antibacterial mouth rinse like Listerine. Mix 1/2 teaspoon of saltin 8 oz. of warm water and rinse your mouth thoroughly with the solution. Do this two or three times throughout the day. The antiseptic and anti-inflammatory properties of the salt will fight infection and reduce swelling.

Eat a raw apple or pear.Do this 30 minutes after a meal to help clean your teeth and heal damaged gums.

Eat raspberries. Do this on an empty stomach two or three times a day and make sure not to combine them with a dairy product.

Most importantly of all, though, remember that if your bleeding gums don’t yield to such home remedies, or if you suspect they may be related to a serious condition like gum disease, it’s time to see your dentist or periodontist.